The manual provides information and practical exercises to let you learn how data abstraction can be used in program to support and simplify the implementation of an algorithm.

At the end of this exercise, you should be able to
• make use of appropriate data structure to improve the structure of a program.
• apply various concepts learnt in earlier topics (conditional selection, looping) and various functions to develop more complex programs.

i) Raspberry Pi 3 Model B (RPi3) board with Sense HAT add-on display module/board.
ii) A USB power source to power the RPi3 board (E.g. Power Bank, Adaptor or USB port of a desktop computer).
iii) A computer (desktop PC or notebook) with Ethernet port and cable for remote access of RPi3. Software (open source) to be installed on the computer – PuTTY, VNC Viewer and WinSCP

A data structure is an organization of data in such a way to allow more efficient manipulation of the data by a program. For instance, you have been using integer and string in your programming exercises, which are basic (known as primitive in Python) data structure that contain single value of a data, consisting of a sequence of numbers and characters respectively. With data arranged in certain structure, you can then apply various operations to these data structure; such as arithmetic operations for integers and string manipulation (e.g. isdigit() function).

In this exercise, you will learn how to use two data structures that store a collection of values (instead of single value) to simplify your program organization. They are Tuple and List (which are known as non-primitive data structure in Python).

For example, you can use (and had been using) Tuple data structure (which is immutable) to specify the R-G-B element of various colours in terms of numbers when displaying message on the Sense Hat module, such as the following:

You can further combine it with the List data structure (which is mutable) to display image on the Sense Hat display, which you will learn in this exercise.

2. Pixel display on Sense Hat board 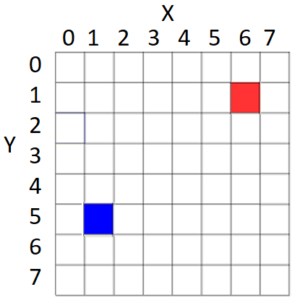 The Sense Hat board’s display is organized using an 8×8 LED matrix, where each LED can be used as one pixel of an image and addressed by using the x-y coordinate system. The numbering of both axes begins at 0 in the top left-hand corner as shown here. The red pixel is hence at coordinate (6, 1), while the blue pixel is at coordinate (?, ?). You can then set the colour of the individual pixel by using the set_pixel() function as follows:

• Code a program that makes use of the appropriate Tuple data structure to light up the LED on the four corners of the Sense Hat display with four different colours.
• Change your program such that it displays the 4 colours at random positions on the Sense Hat display.
The following functions will be useful to implement these features:

3. Image display on Sense Hat board

To display an image, you can set multiple pixels individually using multiple (64) set_pixel() function calls, but this will obviously be very tedious to code, and prone to error. Instead, you can use the List data structure to construct an image, and then display the whole image using one function call. A List data structure consists of multiple elements, and is defined by using the square brackets [e1, e2,…]. (Compare this with Tuple which uses parentheses, i.e. the round bracket (e1, e2, ..) ).

The following code snippet shows how you can use the List data structure, whose elements in turn consists of Tuples, to define an image and has it displayed on the Sense Hat board by calling the sense.set_pixels() function. 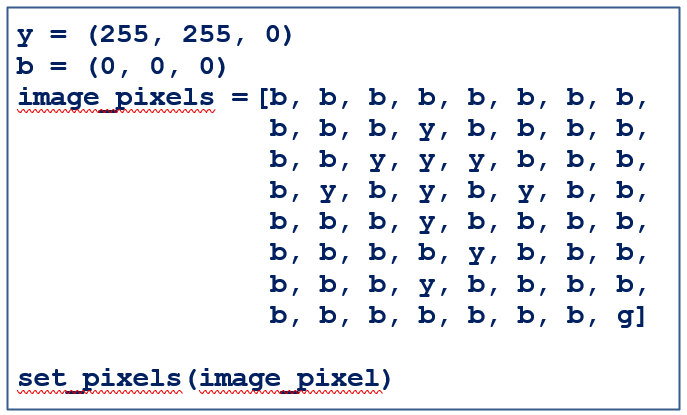 • Modify your program such that the image can switch between random colours.

The Sense HAT display board contains 3 sensors integrated in the form of an IMU (Inertial Measurement Unit) chip:

With the accelerometer, you can use the sense.get_accelerometer_raw() method to detect the amount of G-force acting on each axis (x,y,z) of the board as follows.

(Side note: In here we create an object ‘acceleration’ that stores the return value in the form of a dictionary associate with 3 key entries: x, y and z)

By holding the RPi board vertically as shown below, you can detect the board’s X-Y rotation orientation (and hence switches between ‘portrait’ and ‘landscape’ modes as on a mobile phone when watching video). 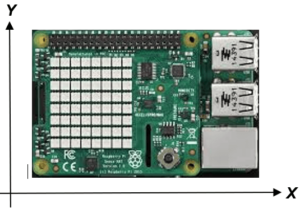 • Using the program you developed in exercise 5b that randomly orients the image you created in any one of the four orientations, this exercise is to develop the code to also detect the orientation of the board, and check whether it corresponds to the orientation of the image after it is randomly changed. The idea is to create a game that requires you to rotate the board within 1 second such that the randomly oriented image (in green colour) is always pointing in the ‘UP’ direction, which otherwise the image will change to red colour and the game is terminated.

Tips: You may want to round the x and y values obtained through the accelerometer to a single digit number for easier detection of the orientation of the board.

• Reduce the 1-second time allowance progressively until you ‘lose’ the game. Show the number of successful trials on the board when the game is terminated.

Top 5 Online Tools for Base64 Encoding and Decoding

What does != mean in Python?

What are literals in Python?

Check if file exists in Python