Before we dive deep into Multithreading in Java. Let’s say we want our program to execute multiple processes. How do we do it?

Basically, there are two ways to achieve multi-tasking:

However, we use multithreading than multiprocessing because threads use a shared memory area. They don’t allocate separate memory areas so it saves memory. Moreover, context-switching between the threads takes less time than process. 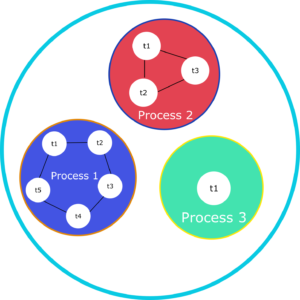 What are Threads in Java?

A thread is a lightweight subprocess. It is a separate path of execution.
Threads are independent. It uses a shared memory area. Java provides the Thread class to achieve thread programming. Thread class provides constructors and methods to create and perform operations on a thread. The Thread class extends the Object class and implements the Runnable interface.

How to use Threads in Java?

There are two ways to use threads in Java. Let’s look at them one at a time.

1.By extending the Thread class

In this method, we extend the features of the already defined Thread class using the extends key-word. Then we override the method named run(), which is going to be executed when the thread starts.
Finally, in the main method, we start the thread using the start() method.

2.By Implementing the Runnable Interface

Here, we implement the runnable interface in the Demo class. Then create an Object of it and pass it as an argument to the Object of Thread class.

Thread scheduler in java is the part of the JVM that decides which thread should run. There is no guarantee that which runnable thread will be chosen to run by the thread scheduler. Only one thread at a time can run in a single process.

Each thread has a priority. Priorities are represented by a number between 1 and 10. In most cases, thread schedular schedules the threads according to their priority (known as preemptive scheduling). But it is not guaranteed because it depends on the JVM specification that which scheduling it chooses.

The join() method causes the currently running threads to stop executing until the thread it joins with completes its task.

The Thread class provides methods to change and get the name of a thread. By default, each thread has a name i.e. thread-0, thread-1, and so on. By we can change the name of the thread by using the setName() method. The syntax of setName() and getName() methods are given below:

Example of naming a thread

Advantages of Thread over Process

A thread once created goes through certain life stages in a program. There are mainly five stages: