This tutorial is about creating a Hangman game in Python. The Hangman game is a word-guessing game played between the computer and a human player. The gameplay goes as follows:

The screenshots below show sample gameplay: 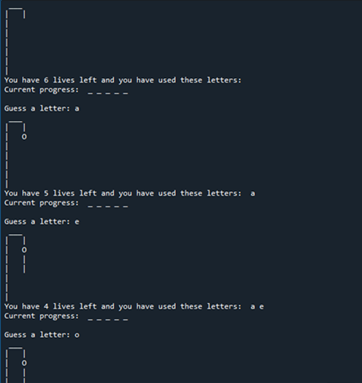 How to Make Hangman Game in Python

The hangman game is divided into three modules to simplify the program:

Each of these modules’ functionality is discussed in detail below, along with screenshots of the hangman game code in python.

The WordCache class defined in this module helps to load words from the words.txt file, store them in memory, and provide words on request.

The __load_file() method loads the words.txt file into the __words list attribute. However:

The source code below shows the contents of the words.py module.

class Game defined in this module contains the main functionality of the hangman game. However, it needs to import words.py so that it can fetch the secret words needed for each gameplay. The complete source code of this module is shown below.

The Game class consists of the following definitions:

The while-loop first gets the player’s guess, then it checks for one of the following situations:

After the while loop is exited, a message is displayed to the player based on whether all the letters of the secret message were correctly guessed, or all the attempts were exhausted.

The Main Module or driver module of the Hangman game: main_module.py

main_module.py is the entry point of the game. It allows the player to replay the game as many times as he wants.

Each time the user agrees to replay the game (by entering ‘yes’). The game loop is repeated, and then the user is asked again if he/she wants to replay. Only when the player enters any other input does the loop, and the program, exit.

That’s it for our game of hangman. You could think of other ways this simple hangman game could be extended. For example

I hope you had fun while learning how to create a hangman in python. Thank you for reading to the end, and don’t forget to continue building your skills by creating more fun projects!

Want to get python help for more such awesome python projects?  Feel free to contact us.

What are the reasons to buy Twitch viewers?

What does != mean in Python?

What are literals in Python?

Check if file exists in Python